Hmmm…Only one melt down and one head wound!

Debra talked about letting go during her Friday Hatha class and asked everyone to set an intention to let go of something that does not serve you. I knew immediately what I needed to let go of….frustration with my mother. It was a good and hard class. Afterward I felt centered and peaceful. The next day I woke up later than expected. In fact the entire household really slept in. I considered skipping my morning meditation because I wanted to get started on the painting at my mother’s house, but then thought that might not be a 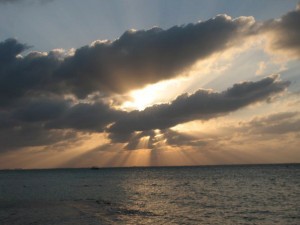 good idea. So I set my intention on patience and meditated for 30 minutes. We spent almost 6 hours painting the main floor of her condo. I was surprised at how well I handled everything. Well not everything, I did have 1 melt down. Before I tell you about the melt down, which was only 5 minutes of almost 6 hours, let me tell you about the things I didn’t react to. The week before she had a check for $397 that she had not deposited, and when I asked her about it and she didn’t know what happened to it. So I went searching for it. In my search I found: a check for $1800 from 12/16, 3 Kohl’s credit cards, 2 JCP credit cards, $300 cash in her purse, 2 driver’s licenses and she carries her SSN card in her purse. I found the patience to talk with her about all the stuff I found. I left with those 5 credit cards and the $1800 check so I could deposit it for her. She agreed to let me cut up the credit cards. The only thing she would not agree to is to let me put her SSN card in my safe. She kept saying she needed it to prove how old she was (really, no birthdate on a SSN card) or some place that she couldn’t remember always asked for it. I pushed a little but then let her win that battle. I’ll bring it up again because of the potential identity theft. After all of that, I got back to the task of painting. It seems like every time Kim and I embark on a remodeling project someone gets hurt. Well this time it was her. The ceiling fan was on high to help move the paint fumes. Somehow she put her head into it! She has a nice head wound but her bangs will cover it. That isn’t nearly as bad as the time she dropped a small crowbar on my head when we tearing down paneling!

We were getting close to wrapping up work for the day. I’m putting things back in order while Kim finishes up painting the last small wall. I put the shade back in the window and then start working on the funky curtain sheers. Mom comes over to help me because neither one of us is sure of how to get it like it was. There is another bar that goes over the window with one long sheer curtain. I hang that up and my mom tells me it’s backwards. I don’t think it is but I turn it around. We drape the other curtain around it then she says that same one is backwards again. I explain that I just turned it around but she is insistent. So I turn it around again, which isn’t easy. Then we messed with the other curtain for a few minutes and she says that same one is backwards again. I try to explain to her that we have now turned it around 3 times. She says I didn’t and the melt down ensues. I’m tired and exhausted and can’t understand why she cannot tell that it isn’t backwards because the tag is facing towards the window. An “F” bomb or 2 fly while I take it all down with great frustration and am ready to throw it out the door. Kim in her infinite wisdom comes to my rescue and takes the curtain. I then retreated to the roller and kept the painting going. She was very patient with my mom and I kept rolling that paint. On the way home we had a really good laugh over my melt down and mom didn’t seem too phased by it. I call that one small step forward!

Setting an intention is a powerful THING. I do believe setting an intention to let go of my frustration during the yoga class followed by an intention of patience lead to a very successful day preparing my mother’s house to be sold and for overseeing her financial situation. I know that Hatha Yoga class was one of the best classes I have had in a long time. I felt more than just centered and peaceful; I felt strong. I don’t consider my melt down as a failure but just part of the journey. In the end it meant nothing and it did not hurt or impair our relationship.